What happens to applied nitrogen? 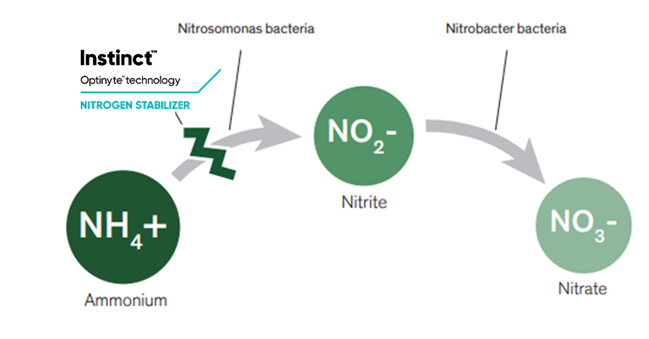 Soil doesn’t form strong bonds with negatively charged nitrates (such as NO2- and NO3-) as it has a negative charge itself. These nitrates are prone to leaching and denitrification if they aren’t readily taken up by the plant, meaning they are unavailable to the plant when required.

There are two forms of nitrogen that crops use: ammonium NH4+ and nitrate NO3-. Both can be used by plants, but the ammonium form (NH4+) is more stable in the soil, whereas the nitrate form (NO3-) is more likely to be lost through leaching or denitrification.

What is leaching and denitrification?

Leaching is the loss of nitrates to the soil below the root zone. It can be caused by rain and irrigation. Leaching occurs because soil and organic matter are negatively charged, as are NO2- and NO3- nitrates. This means they are easily washed away, with leaching most common in coarse, sandy soils.

What are nitrogen stabilisers and how do they work?

There are three main types of nitrogen stabilisers:

There are several types of slow or controlled release fertilisers, often based on a polymer coating.

Urease Inhibitors affect the urease enzyme, catalysing the hydrolysis of urea on the soil surface. A small amount of soil moisture can cause the unprotected urea to hydrolyse. It then converts to ammonium and carbon dioxide, which could then be lost through volatilisation.

Nitrification Inhibitors, such as Instinct, slow down the conversion of ammonium at the first stage of nitrification. The Nitrosomonas bacteria that initiates the conversion from NH4+ to NO3- is inhibited, which means usable nitrogen is stored at the root zone.

What are the benefits of Instinct nitrogen stabilisers?

Optimize opportunity for yield and profit

Why shouldn’t I just put on extra fertiliser?

The days of “putting on an extra bag” are gone. The amount of nitrogen applied to a crop needs to be based on sound agronomics – too much or too little can both cause problems. The key is to apply the proper amount and protect it, for the most efficient use of your fertiliser investment. Applying more nitrogen does not ensure there will be enough when the plant requires it (i.e. heavy rains, warm temperatures will increase the speed of denitrification).

Where can I purchase Instinct nitrogen stabiliser?

Instinct is available through Agrovista.

Instinct® is a nitrification inhibitor. It works by slowing down the conversion of ammonum into nitrate. Nitrate can be lost from soils and into the environment by leaching or greenhouse gases.

The benefits of Instinct nitrogen stabilizer

This maize planting season, using a nitrogen stabiliser could stabilise enough N to allow growers to reduce applications by up to 20%, whilst still maintaining yields. Read more from Corteva's Colin Bowers here.

Receive in-season information and advice, along with getting 2 BASIS points by signing up.