Manures are widely used, a great soil conditioner and can be an excellent source of nutrients. However, inappropriate use and dosage can lead to unwelcome plant growth symptoms. Weather factors, disease and viruses can also affect plant growth. Symptoms can resemble those from herbicide residue and can be wrongly attributed to the presence of herbicide residues.

This website will help gardeners and allotment holders who think they may have used manure or compost containing aminopyralid or clopyralid residues on their crops. Or who are concerned about possible residues in sources of manures or compost.

What are aminopyralid and clopyralid?

Aminopyralid and clopyralid are active ingredients of herbicides used in grassland to control difficult to control weeds such as thistles, docks, ragwort and nettles. Clopyralid is also used in some lawn care products.

Why do farmers use herbicides on grass? - Livestock farmers want to maximise the feeding value of the crops they grow so that they are less reliant on purchased animal feeds. Weeds compete with grass, are unpalatable to stock, and some can be poisonous. Herbicides can be used to rejuvenate worn out grassland where re-seeding is not possible, and pasture rejuvenation can reduce carbon footprint compared with reseeding with new grass.

Animal manure is an excellent source of nutrients and a useful soil conditioner and its use should be encouraged. Generally, there should be no issues with the presence of herbicide residues and the likelihood of their presence is very low. Some social media attention has greatly amplified a problem that has affected a very small number of gardeners and allotment holders. For 2020 we estimate that of all the manure used on gardens or allotments, about 0.008% may have had a herbicide residue issue.

Choosing the right compost is essential to get the most out of your plants, but the ingredients that make up different composts can vary dramatically and there are differences in the quality of commercial compost available. There is also ambiguity in the definition of a compost – some are intended for use only as a soil conditioner and should be incorporated with soil before use, whereas others have been specially formulated for sowing seeds, growing on seedlings and young plants, or growing mature plants in containers. Always use a compost for the purpose for which it was intended e.g. seed and cutting compost for sowing seeds etc.

Many commercial composts have been reformulated to reduce or remove the amount of peat used in their manufacture. In some cases, this may have resulted in a change in the quality of compost available to gardeners.  Some composts which have sub-optimal nutrient levels or high salt levels can cause plant growth symptoms which can be confused with those caused by herbicide residues.

Good structure and aeration in a compost is important for strong root development.

The no-dig method of gardening has seen increasing popularity in recent years.

No-dig gardeners should ensure that the compost they are using is suitable for no-dig situations, as many 'composts' are actually soil conditioners which require incorporating into the soil for best effect.

Animal manures are not generally suitable for planting straight into as a growing medium, but require incorporating with the existing soil before use. Avoid using animal manures which contain a large proportion of bedding material, e.g. wood shavings, as these can lock up nutrients and result in poor plant growth.

Ask your manure or compost supplier the right questions and source the correct product for your situation.

Not all plants species are affected by aminopyralid or clopyralid. The most sensitive species include beans and peas, potatoes, tomatoes, lettuce, spinach and dahlias.

Plants such as carrots and parsnips, raspberries and currants, and flowers such as roses may show some effects.

Other species, such as sweetcorn, cabbage, cauliflower, broccoli, kale, turnip and radish are not affected.

In sensitive plants aminopyralid and clopyralid residue effects are seen in new plant growth - so the youngest leaves are affected,  resulting in cupping of leaves, stunting of plants, and curling of the growing point, giving it a 'fern-like' appearance.

Aminopyralid and clopyralid residue levels found in manure or compost do not affect germination or cause plant death.

Use the image gallery to compare your plant symptoms to identify possible root cause.

Use the bioassay method below to test manure or compost for the presence of hormone herbicide residues such as aminopyralid or clopyralid. 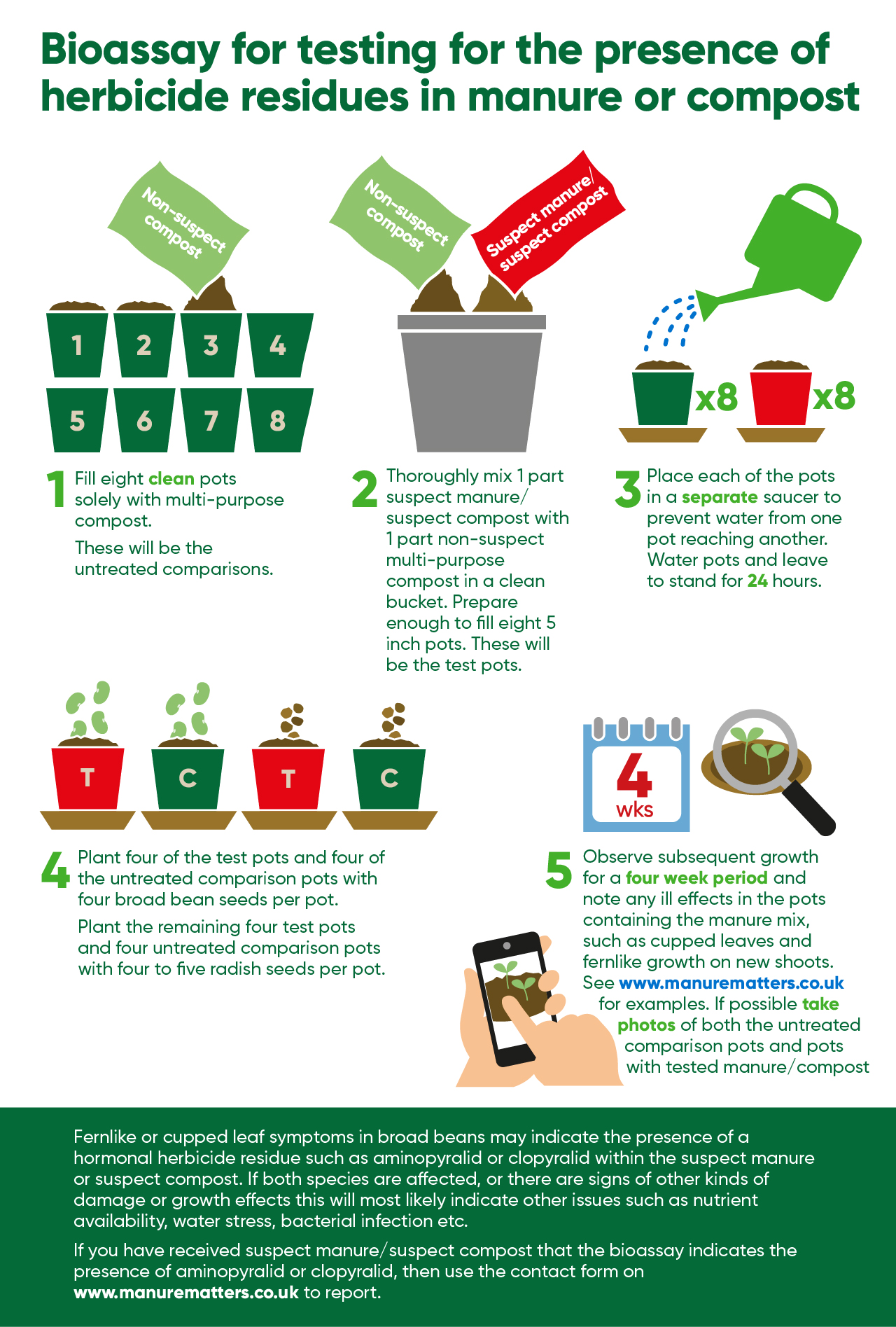 If these products cause problems, why are they used by farmers?

For grassland farmers, these products offer the most effective weed control on the market today, helping to manage difficult to control weeds, such as thistles and docks as well as weeds that are potentially dangerous to livestock, such as ragwort.

These sprays deliver a level of control that frequently removes the need for follow-up treatment, so less herbicide is used overall.

If herbicide users follow the clearly stated recommendations on the label printed on each pack, there is very little chance that they will be found in manure in your garden.

Products containing aminopyralid and clopyralid have been authorised in the UK following an evaluation of extensive safety data by the government’s Chemicals Regulation Directorate (CRD).

Is food from affected crops safe to eat?

Yes. In its review, the independent Government agency – Chemicals Regulation Directorate, (CRD)  (previously PSD) indicates that the levels of residues found in affected crops do not have any implications for human health.

“Although aminopyralid is an effective weedkiller it is of low toxicity to mammals. Additionally CRD has assessed further information from the manufacturer that confirmed that using manure which may contain residues of aminopyralid in the ground used to grow vegetables does not have implications for human or animal health.

Even if the manure was derived from animals fed only grass, or silage made from grass treated with aminopyralid, and the plants took up all the aminopyralid present in that manure, the highest residues would not give rise to consumer health concerns and the vegetables should be safe to eat."

Can other factors cause these or similar symptoms?

Yes, there are a number of other factors that may cause plant injury such as damping off, or insect or disease damage, trace elements and nutrient deficiency caused by weather conditions, soil and / or compost interactions, and you should check for these. See the image gallery. You should also check the compost is appropriate for the intended use (i.e. mulch, potting compost, soil enrichment), follow compost recommendations regarding digging in and use rate.

Some vegetables have been affected, others have not?

If peas, beans, tomatoes or potatoes (the most sensitive crops) are not affected, it is unlikely that aminopyralid or clopyralid are the cause.

Will my plants be OK next year if I plant them in an affected allotment?

Assuming that any affected manure or compost is worked in to the soil, and the ground is turned over, well cultivated and moist to ensure the breakdown of plant material in the manure/compost, then the ground will be safe to grow dahlia corms or vegetables the following year. If practicing a no-dig garden approach, then rake off and remove any residual manure or compost in the year prior to planting.

How are aminopyralid and clopyralid broken down?

Aminopyralid and clopyralid are broken down by soil micro-organisms, which live in damp, well-aerated soil. These conditions are best achieved by maintaining good soil conditions, and thoroughly incorporating the manure or compost into the soil. In dry soil conditions, breakdown may take longer, and you may need to consider watering.

What can I do with affected manure?

The following options are available to you:

If you think your garden or allotment has been affected by aminopyralid or clopyralid residues in manure or compost, please use the form below to contact us. Please provide as much detail as possible to enable us to help you resolve your issue.